According to Egypt Oil & Gas Newspaper, The Minister of Petroleum and Mineral Resources, Tarek El Molla, met with international mining companies’ heads, who could be potential participants in Egypt’s gold mining bid round, according to a press release.

This came on the sidelines of PDAC, where the minister met with Rick Rule, CEO of Sprott US Holdings Inc., who hinted at the possibility for enrolling in Egypt’s gold mining bid round. Additionally, Kinross Gold Corporation expressed its intention to invest in Egypt following the radical change that Egypt’s mining licensing, financial and legal system went through.

El Molla noted that this is a result of Egypt’s mining transformation which creates an encouraging investment climate.

El Molla showcased initiatives taken to develop the mining sector and to set the scene for attracting investments in light of the mineral resources law and its executive regulations amendments. Additionally, amending the gold and associated minerals agreements’ model will achieve an economic balance between the investors and Egypt.

During the meeting, El Molla noted that Egypt will conduct a survey on the Western Desert, using remote sensors, which covers 500,000 km. This would support Egypt’s future plans to host bid rounds in the area.

El Molla also reviewed the minister’s strategies for the next 10 years to increase the mining sector’s contribution to the gross domestic product (GDP). He also discussed Egypt’s investments plan to increase the added value of minerals, especially iron.

Javier Cordova, Ecuador’s former Minister of Mining, commended the steps taken in Egypt to develop the sector, noting that Egypt is on its way to becoming one of the largest mining countries in the world. According to him, this comes as a result of the ministry’s plan to enhance the sector in accordance with modern and scientific methodologies. 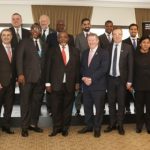 Egypt’s Mining Bid Round Sparks Interest as PDAC Wraps Up

Sign up for industry alerts, our latest news, thoughts, and insights from Promina.